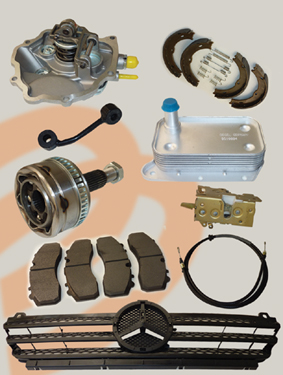 “Egel Automotive” was established to be specialized in spare parts for light commercial vehicles in Istanbul in 1996. In the early years, the company purposed to present a large product range. Besides providing original Mercedes-Benz spare parts the company continued to give a good service with providing foreign aftermarket products.
In time with the good business relationships with Mercedes-Benz Turkey, it started to work as one of the retailer of Mercedes-Benz. Beginning from 1998, because of the market conditions that were becoming harder ,the company started
to search different alternatives and decided to take advantage of the powerful Turkish related industry. In that period, with the collective works with domestic producers, the company started to produce and sell products as a Turkish- European brand.

In 2000, The company decided to collect all domestic goods under one brand and established “Begel” company and tried to keep institutionalization in the foreground. And in the following year Begel Germany applied to ISO 9001-2000 quality certificate for Begel company and got the certificate in same year.

In that process, while the group was trying to present large product range alternatives under EGEL constitution, started to sell its own products under name of BEGEL brand.With the developing and changing world conditions, the company improved its branding strategies and established “BEGEL GmbH”, with the aim of becoming a global brand in Germany and has all the legal rights of the brand “BEGEL GERMANY”. Hence that time, Begel Automotive Company in Turkey became a manufacturer and supplier of Begel GmbH Company and Begel Germany Brand. In the following years, the group started to sell products in all around the world with the brand Begel Germany in high quality and became a Big Company that makes exportation approximately in to 50 countries, 5 continents beginning from 2005. In 2005 the company decided to collect the custom manufacturing that was pursued by the company with the aim to loom large in competition, to reduce the expenses and to improve the product quality under its own constitution name. And in 2006, the company started to produce in its own factory with establishing the “Begel Spare Parts Company”.Begel Group shows development in world standards and continues to develop private solutions for special requests and products with using high technologies in its own facilities.